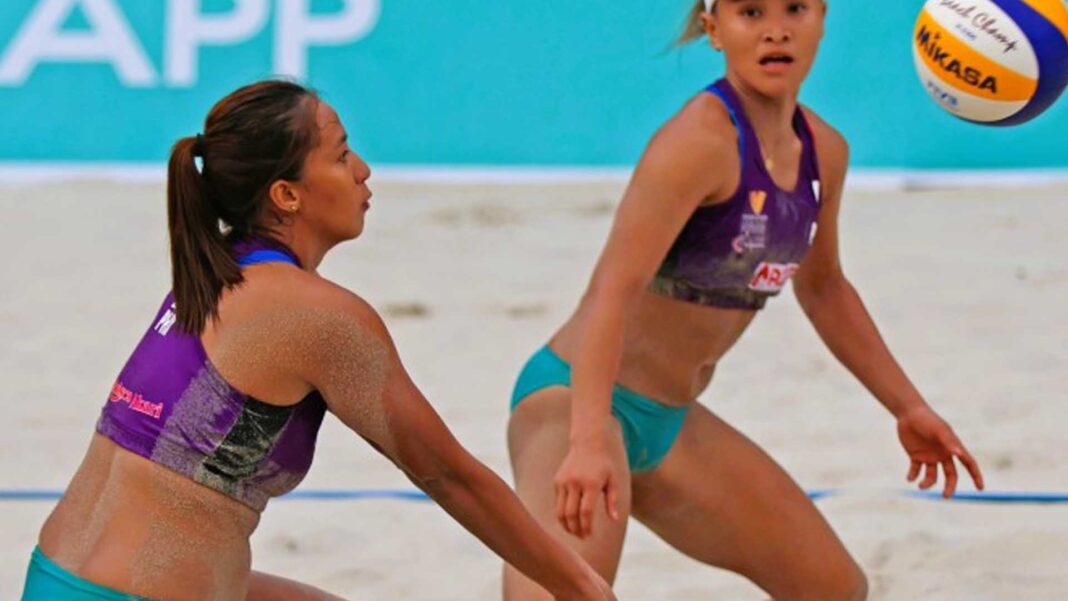 Rondina had to endure leg cramps throughout the match, coming up with three straight points in the deciding third set to seal the victory before an enthusiastic crowd at the Subic Bay Sand Court.

Before that, the score was 10-12 when Eslapor, who took a five-minute medical timeout in the second set due to muscle cramps from the thighs to her abdomen, fired four consecutive aces.

“We were tired … after having gone through the competition, the pressure and the strong opposition,” said the 26-year-old Rondina, who hails from Compostela town in Cebu province.

“I could hardly jump, even during our pre-final training,” added Rondina, who won back-to-back bronze medal at the Southeast Asian Games with Bernadeth Pons, who is still recovering from a shoulder injury.

Gonzaga was tapped two weeks ago to replace Pons.

“Honestly, we never expected this one, all of us. Credit to them [Eslapor-Rodriguez pair], they are also good and strong,” Gonzaga said.

The pairs of Espolar-Rodriguez and Rondina-Gonzaga trained with noted Brazilian Joao Luciano Kioday for 10 days before the tournament.

“It’s all-Filipino so we went out there playing as if we were just training,” Rodriguez said. “But yes, they gave us a good fight and we fought hard, too.”

“It’s almost unbelievable. These pairs were formed not a long time ago, but they immediately showed cohesion and winning form on the court,” Suzara said.

“The result augurs well for Philippine volleyball and for sure, the PNVF national team program will push toward getting better in the international arena,” he said.

Sakamoto and Sawame prevailed over the Israelis, 21-15, 21-18, to settle for the bronze medal.

Latvia’s Martin Plavins and Mikhail Samoilov outplayed Thailand’s Jongklang Surin and Nakprakhong Banlue, 21-19, 21-17, in the battle for the bronze. (PNA)