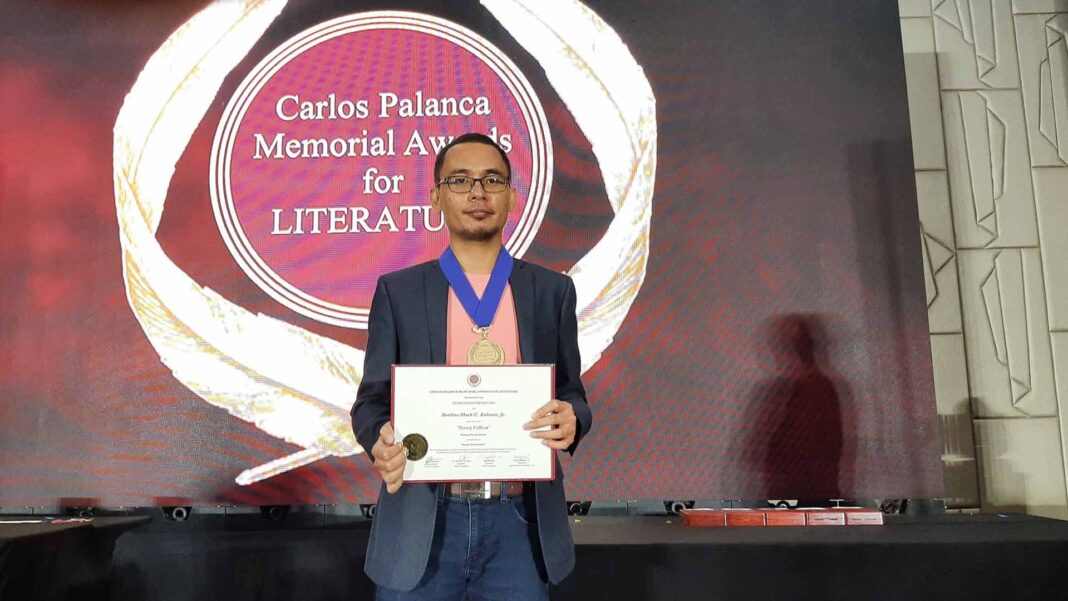 Amoy Pulbos, a story on dreams and exploitation, bagged First Place of Dulang Pampelikula Category at the 70th Carlos Palanca Memorial Awards for Literature, the most prestigious and the longest-running literary contest in the Philippines.

Established in 1950, the distinguished competition named after businessman and philanthropist Don Carlos Palanca Sr., is considered as the premier recognition in the world of literature.

After a two-year hiatus, it has received approximately 1,455 entries from Filipino fictionists, essayists, poets and playwrights from across the country. However, it only recognized 59 writers in its awarding ceremony held at the Marquis Events Place in Bonifacio Global City, Taguig.

Leading the Dulang Pampelikula (Screenplay in Filipino) Division was filmmaker Avelino Mark Balmes, Jr. also known as Lino Balmes. His winning piece shed light on the daily challenges faced by Filipinos in pursuit of a more comfortable life for their families.

Amoy Pulbos followed the journey of Chona and Ramil, a couple who believed that the jackpot from television show Yes Yes Idol was their only way to provide a better future for their child Igit. Once tapped as contestants, they met Bheng, one of the newest dancers who would do everything to be a regular employee, and Pollie, an overworked staff who has somehow neglected her own son.

In their quest to achieve their respective goals, the characters discovered the different realities on television and behind the camera situations, and what they were willing to sacrifice for a far-fetched dream.

The screenplay was mainly inspired by a pair of actual gameshow contestants Balmes chanced upon on TV. “I wondered what their life would be like six months after joining the game show. Will their dreams come true if they won and how much will they regret if they didn’t?” he recalled.

When it was adapted into screenplay, Balmes, who has worked for TV, theatre and film, incorporated his first-hand and learned experiences in the narrative. Thus, the inclusion of Bheng and Pollie who represented the employees who work hard for their families.

“The Filipino is known to be a hard worker so it’s not unusual to see them do everything to reach their goal,” the storyteller noted. “But reaching one’s goal isn’t as easy here in the country, especially when those in power exploits the Filipino’s desire and very being.”

Balmes honed his creative talent under the Digital Filmmaking (DFilm) Program of the De La Salle-College of Saint Benilde. He trained with documentary films under the premier program American Film Showcase.

His works include Mano Po Legacy and Orlie. In 2017, his first feature screenplay Pablo Ocampo Extension bagged the 3rd Prize of the Dulang Pampelikula Category at the Carlos Palanca Memorial Awards for Literature. His play Amoy Pulbos ang mga Alabok sa Ilalim ng Riles ng Tren was one of the featured plays of Virgin LabFest 14 staged at the Cultural Center of the Philippines (CCP) in 2018.