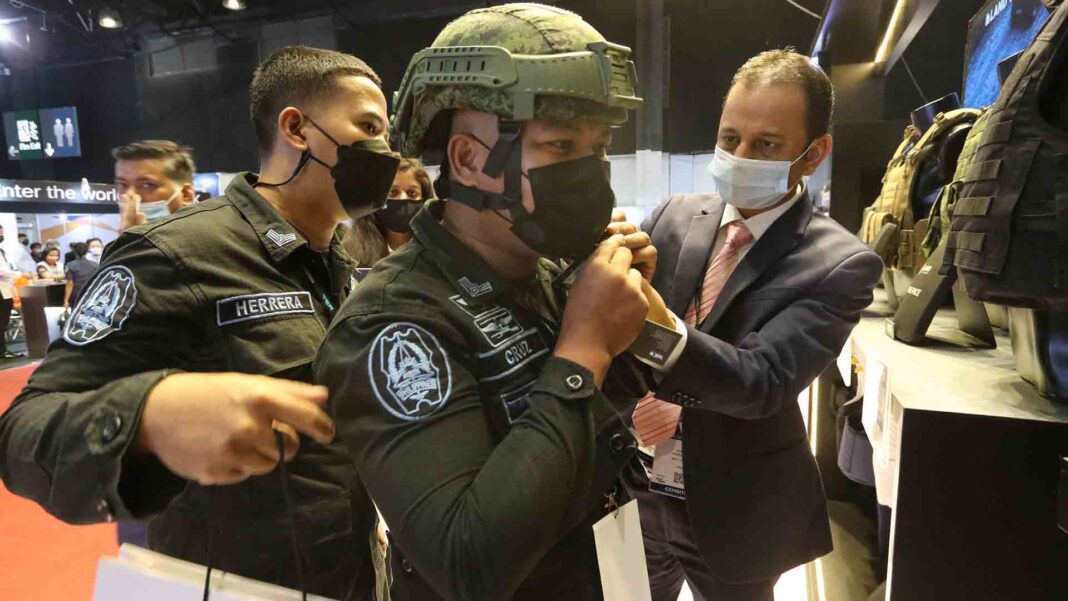 The Kavro Body Armor System is unique because of the composite elements it is made up of: it comprises an integrated rucksack, the Insta Load Distribution System (ILDS), a quick release system, a laser cut molle system and a hydration pack.

The Kavro rucksack ranges from 30kg to 60kg in capacity and can be easily attached, mounted and managed. The ILDS is an upper body exo system that deals with the weight carried by the soldier by lifting it off the shoulder, back and spine and redistributing it to the hips and legs for greater mobility and endurance.

MKU Managing Director Mr. Neeraj Gupta said: “The Kavro Body Armor System is designed to help soldiers retain energy and reduce fatigue, so as to enable them to carry out missions confidently and with greater comfort, mobility, endurance and survivability. It addresses real-life challenges that soldiers face, where they have to carry a lot of equipment, both standard and special issues such as heavy weapons, tactical devices, battery packs and ammunition that can collectively weigh 30 kgs to 60 kgs. Such heavy load significantly hampers the soldiers’ agility and ability to maneuver and hinders their operational efficiency while, at the same time, causing exhaustion.”

Night Defense with ease and clarity

The Netro Optronics NB3100 Night Vision Goggles is made specially for pilots, to help them easily navigate the aircraft during Nap-of-the-earth (NOE) maneuvers, while flying at very low altitudes to avoid enemy detection and attacks in a high threat environment, or while flying off, or landing, at night or during pitch dark conditions in dangerous environments.

The Netro TD-5100 Night Sight, on the other hand, enhances the situational awareness of tank operators by accurately analyzing the contours of the terrain, especially during full night operations, which are a significant challenge faced by tank commanders and operators who operate without such sensors.

“MKU is proud of being able to introduce new optronic solutions such as the Netro NB-3100 Aviation Night Vision Goggles and Netro TD-5100 Driver Night Sight for tanks and armoured fighting vehicles. Optronics can mean the difference between life and death for soldiers when they are in the line of fire,” said Ms. Prachi Gupta, CEO of MKU’s Optronics Business.

Aside from these new solutions, in the last three years, MKU has supplied 120,000 body armors, 30,000 helmets, and more than 1000 night vision devices to the Philippine Army, The Philippine International Trading Corporation and Philippine National Police. Having participated in ADAS since 2014, MKU hosted the President of the Philippines, Rodrigo Duterte, at its booth in 2018. This year the booth was visited by Delfin Lorenzana, the Philippines Secretary of National Defense and Colonel Leodegario Dela Paz (Director Defence Procurement, Department of National Defence, Philippines).

“We wholeheartedly support the AFP’s [Armed Forces of the Philippines] modernization initiatives. MKU has been a part of this effort for more than three years by supplying ballistic protection and optronic solutions. We hope to continue this collaboration through our best and latest defense and security solutions,” said MKU Chairman Mr. Manoj Gupta.